The Archives Of Grace 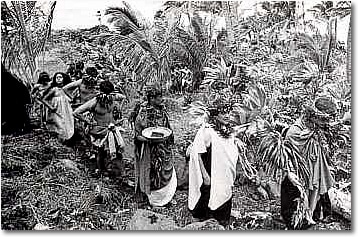 As an entirely oral society, the hula provided Hawaiians a method of chronology as well as an avenue for artistry. The practitioners had the qualities of commitment, integrity and sensibility. The hula went beyond the obvious physical discipline. It also enveloped the mental, the emotional, and the spiritual well-being of its practitioners.

The study of hula was neither frivolous nor was it dreary. It was, and still is, a joy. In spite of its attacks and attackers, the hula has managed to survive! This very survival is a display of the vitality and tenacious quality of hula. It is the heartbeat of Hawai`i; it is the soul of her people.

He`olelo no`eau, a proverb: “Makahana ka `ike”; only when one actually does the work can one come to know and understand the profession.

There are only two islands that have survived the tests of time where one can actually touch the magnitude of antiquity of the hula halls.

The only other island is Kaua`i. Ah, Kaua`i of the heavens; Kaua`i full of age; Kaua`i the abundant; Kaua`i the desired; Kaua`i so serene and perfectly beautiful. Kaua`i rich with halls of hula, home of much respected Keahualaka and Kauluapaoa.

Today, many of the hula halls are inaccessibly on government or privately owned property. Most have been documented by survey and conjecture. All of them, except for one, are in major dis-repair!

Wouldn’t it be splendid to be a part of the hula hall at Polihale nestled against its majestic cliffs, looking out to sea where Lehua, Ni`ihau, and Nihoa islands rise! Or listen to the echoes of the drums in upper Hanapepe valley resounding, recalling the genius of Kapuanui, Kapua`opio, Kameahaiku, Makea, and Wahine`ae`a.

What about the thrill of dancing in the hula hall called Nana in Kawa`iiki at Wahi`awa where Ho`okano of Waimea taught? Or having the honor of dancing and depositing one’s mea hula in neighboring Kaulualono where such names as Kanupaka, Pihelelo, Keala`ula, and Keahi Luahine ring.

Only to experience the joy of Pa`u O Hi`iaka at Koloa or the swaying of hula at Wailua River! Is there a hula hall in Waimea? … Nawiliwili?

All of these places are not open to the public nor even to the hula people, except Keahualaka with Kaulupa`oa. A query: are we worthy of such an honor? A question: are there other hula halls in Hawai`i?

Keahualaka, Laka’s shrine, is the most celebrated of hula temples and depositories. From all of Hawai`i, the blossoming youth ultimately made their way to Keahualaka to learn the wisdom, the traditions, the oli, and the hula of the revered past. Keahualaka is one of the locations in that wonderful Hawaiian epic concerning Pele (the volcano goddess), Hi`iakapoliopele (the youngest and favorite sister of Pele), and Lohi`au (Kaua`i’s handsome and talented prince). Keahualaka is the shrine with the longest reputation for being one of the Hawaiian religious and cultural sites in continuous use. 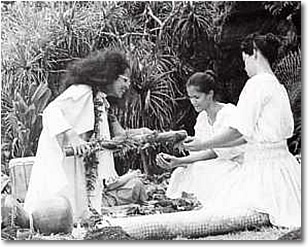 The Kaua`i Historical Society, with Mr. C.A. Brown’s help, placed the care of Keahaualaka and Kaulupaoa in the hands of David Pa and Thomas Hashimoto from 1927 to 1952. In 1959, when Henry Kekahuna visited the sites to do his site plans, the temples were fairly free of brush! From that time until 1975 these sites were abandoned to nature. Java plum, lantana, guava, and other aggressive weeds and grasses so completely covered the sites that one could not see more than a few feet in any direction. In 1975, thanks to the trust and foresight of the late John Gregg Allerton, the owner of the temples and surrounding property, members of Ka `Imi Na`auao O Hawai`i Nei and friends were permitted to begin clearing and cleaning the temples once more. Mr. Allerton requested three conditions be carried out:

3. Have an `uniki – The first public `uniki was held in October, 1983, when every halau hula with known addresses (approximately 120) was invited. (Since then this `uniki, ho`ola`a, ho`okupu has been held every year.)

Trees were cut, roots were removed. Introduced plants were removed. Soon it was noticed that the native plants were returning. Work continued year after year sometimes with large crews, other times with just a few individuals. To date, the members of Ka `Imi Na`auao O Hawai`i Nei have devoted more than 10,000 hours clearing and cleaning the temples. There are even more native plants or Hawaiian introduced plants returning. There are ko`oko`olau (Bidens spp), `ala`alawainui (Peperonia spp), `akoko (Euphorbia spp), hinahina kuahiwi (Aartemisia spp), palapalai (Microlepia setosa), laua`e (Polypodium phymatodes), and one mamaki (Pipurus spp) which was inadvertently cut down by and energetic youth. There was also an alula (Brighamia citrina) and an `Ekaha (Elaphoglossum).

Keahualaka remained literally unknown except to those few kama`aina and those who cleaned the sites every fifth or sixth weekend. That is, until that fateful year when the petroglyphs of Keoneloa were exposed by unusually high seas. A special news coverage of the Keoneloa petroglyphs and Keahualaka with Eomi Tomimbang introduced Keahualaka to the public.

At first only hula people and students of Hawaiian studies came. Then adventuresome Malihini followed by people of various religious faiths found their way to Keahualaka. Now it is also the curious visitor by the dozens who journey to the temple.

Shortly after the news broadcast, the Alula (Brighamia citrina) and the `Ekaha (Elaphoglossum) were stolen. Stones were, and continue to be moved, the majority of which are picked up by ill-informed people, wrapped in La`i (Cordyline terminalis) picked from the temple and placed everywhere. It then is presented as though it were a genuine ho`okupu (a ceremonial gift giving of honor and respect). Unfortunately, this practice is encouraged and perpetuated by some tour operators.

This site and its use is not without controversy. Some people say Keahualaka should remain forgotten and inaccessible to the public. Some say it is Kapu and not to be used at all. Others say the old ways must remain abandoned for Christian doctrine. Still others say abandon Christian doctrine and embrace what they believe to be the “true Hawaiian dogma”.

This sacred hall dedicated to hula is used occasionally by visiting halau hula from throughout our state and the mainland. In addition to the hula practitioners, the sacred hall is used by mystics leaving crystals, money, burnt offerings, effigies, trinkets, and various kinds of food most of which decay quickly resulting in stench and vermin.

Because the site is once again beautiful, it attracts picnikers who utilize it – often leaving their rubbish, tent pegs, and campfire remains behind. Several weddings have been performed there even after being informed that it is inappropriate for the site. These activities point out the need for the revival of the old Hawaiian system of a live-in Kahu (guardian) to oversee the activities and educate the populace.

The work of Ka `Imi Na`auao O Hawai`i Nei also known as Halapa`I Hula Alapa`i is to keep Mr. Allerton’s trust together with the foresight of our kupuna and `aumakua. We are to excite the people to rise up singing and dancing the truths of all the old ways without restricitions. It takes great courage to proclaim He Hawai`i au, “I am Hawai`i”.

He`olelo no`eau, a proverb: “ `A`ole o kahi nana o luna o ka pali; iho mai a lalo nei; `ike i ke au nui, ke au iki, he alo a he alo”! The top of the cliff isn’t the place to look at us; come down here to learn of the big and little current, face to face!