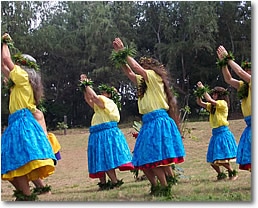 Perhaps people in Hawai`i know Laka best as divine patroness of hula, one of whose precincts is at Ke`e, Kaua’i (for more information on this site, see the section on Keahualaka). As a kino lau (manifestation) of Lono, god of rain and fertility, she presides over the forest plants with which po`e hula (hula people) adorn themselves and the altar that occupied a position of honor in a traditional halau hula.

There is more to this process than simply making people or places look pretty. In hula protocol, the various Laka plants, mostly native forest flora, represented both divine personages and qualities sought by students of hula. Thus, for example, a haumana who needed strength and stamina might wear a lei koa or bring a branch of koa to the halau altar as an expression of her/his need for this quality.

Here, also, the meaning of Laka as tame comes into play. Learning hula is a process of taming the undisciplined body, spirit and mind, the forest personality. To Hawaiians of old, the forest could be physically and spiritually dangerous. In it people could get lost, hurt, or killed; in it lived supernatural beings who were not always friendly. The opposite of its chaos was the tightly ordered space within the halau. Thus the chant with which our haumana ask permission to enter the halau begins, “Liu liu wale i ka uka….long (have I wandered) in the upland forest…” The student’s physical passage from forest to halau reflects her/his mental transition from wild child to poised adult.

It also represents the development of a social consciousness. As the vast and trackless forest symbolizes the untutored child mind, wandering where it will, so the halau reflects organized human communities. Harmonious living with other people requires patience, courtesy, and aloha. Since haumana hula, like canoe voyagers, shared a small confined space, they had to live these qualities. Impulsive and inconsiderate behaviour brought punishment from halau officials whose job was to enforce rules. There was no place for people who refused to learn discipline or to accept the kumu’s authority. However physically gifted they might be, they would never really become dancers.

Dancing demands physical and spiritual poise. This balance requires equilibrium between strength and grace, masculine and feminine qualities, male and female persons. A feature of traditional halau hula that distinguished them from Hawaiian society in general, wherein the men and women occupied distinct spheres, and which allowed considerable sexual liberty, was that men and women lived together chastely. Sexual contact was forbidden, and could bring expulsion from the halau. Certainly for young, attractive members of a culture that did not place a premium on abstinence sharing the confines of a halau would demand great restraint. Such discipline is one aspect of Laka.

On the hula altar (kuahu), Laka presides in her kino lau of a lama (Diospyros sandwicensis) block wrapped in yellow tapa. One meaning of lama is light, and Laka’s representation in this form represents the enlightenment to be found through the discipline of dance.

As so often in Hawaiian metaphysics, this apparently simple form comprehends a whole thicket of ideas. Unlike such light woods as hau and wiliwili, lama, a member of the ebony family, is both pale and dense. This unusual blend, perhaps another form of the combined delicacy and hardness of the ‘ohi`a lehua (also a Laka aspect), expresses a duality often visualized as the goddesses Laka and Kapo.

Beckwith (HAWAIIAN MYTHOLOGY p. 185) cites Emerson’s statement that Kapo gives birth to Laka, and suggests that, as descendants of Haumea, the divine mother of earthly life, these females embody two aspects of reproductive energy. This correlates with Laka (the tame, attractive one) taking form as a wood that embodies light, while Kapo (the darkness) becomes the `ohe (Reynoldsia sandwicensis), a poison tree that sprang up in a single night on Molokai’s Mauna Loa (Beckwith p. 111). In Polynesian thought, Po, the primordial darkness, precedes and engenders Ao, light. So Kapo, in this cosmology, precedes and gives birth to Laka.

As divine patron of lua, the martial art for which hula was the Laka form, and sorcery, Kapo’s character appears sinister. Yet both lua and sorcery have their constructive aspects. Lua experts were equally adept at bone-breaking and bone-setting, while sorcerers could use their powers both to destroy and to protect.

In one view, Kapo plays Ku, god of change, fire, war, and sorcery, to Laka’s Lono. This seems an oversimplification. Ku and Lono seem rather to be two aspects of a single power. It is not always obvious where one begins and the other ends. As the end of Lono’s temporal domain, the Makahiki season, and the beginning of Ku’s is not always easy to recognize, so with Laka and Kapo.

HULA KAHIKO, HULA `AUANA:
Since the annual Merrie Monarch competitions began in the early 1960’s, the terms hula kahiko (ancient dances) and hula auana (literally wandering dances; the term refers to hula which has “wandered” from its ancient rituals and roots, i.e. dances accompanied by instruments and incorporating ideas introduced after contact with Europeans began in 1778) have come into common use.  These originated as categories for competitors, but have become so popular that they have affected modern hula teaching and performance. 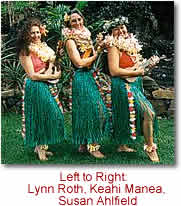 If you look at films or programs of hula from the early to middle twentieth century, you will notice that they usually do not distinguish “ancient” from ‘modern” dances.  From the Kalakaua period in the last quarter of the nineteenth century until the mid-twentieth century, the prevailing style was, as early as 1865, called HULA KU`I or joined hula. Reflecting the increasingly cosmopolitan character of Hawaiian culture during this era, hula  ku`i blended traditional Hawaiian music and choreography with melodies and movements adopted from sources such as Europe.  In more recent times, the evolution of Hawaiian reggae, rap, and Jawaiian music has continued this process of assimilation.

It is interesting that the Merrie Monarch festival, named for King David Kalakaua, and founded to preserve hula as an indigenous Hawaiian art form, has departed from the hula ku`i popular during his reign.  Nowadays, as a result of Merrie Monarch influence, it is common to begin a performance with a suite of hula that are either of ancient lineage or are modern compositions
created and performed in the ancient style, accompanied by chanting and drumming.  Often they will finish this segment, leave the performance space, perhaps change their costumes, and then return to dance in the modern manner, accompanied by guitar, `ukulele and other non-native instruments.

HULA MA`I: Procreation dances.  Frequently the mele which these hula illustrate honor the ma`i (genitals) of royal personages. Since continuity of leadership was important to social stability, it was imperative that Hawaiian ali`i (chiefs) replace themselves in an orderly way.  For this to happen, their reproductive faculties needed to be in good working order.  Therefore the hula ma`i express hope for the future of, not just the chiefly class, but the people as a whole.

HULA NOHO: Dances performed in a seated or kneeling posture.  Usually the dancers provide their own vocal acompaniment.

MELE: Chants and songs that accompany dances.  The word mele can apply to both ancient and modern compositions.

`OLAPA: To flash, blaze suddenly 2. Several varieties of native trees in the genus Cheirodendron 3. Dancer, as contrasted with the chanter or ho`opa`a. (ibid p. 283)

HALAU: Long house, as for canoes or hula instruction 2. Large, numerous (ibid p. 52).  In modern usage, HALAU HULA can refer to a physical location where hula instruction takes place, or to a group of hula students.  Please note, the popular phrase HULA HALAU is not good Hawaiian usage.