From a Kaua`i Viewpoint–Winter Solstice

On Kaua`i in bygone days there existed several sites sacred to the Hawaiian people in the area between Koloa and the southeastern area of Maha`ulepu that were fine observational sites for viewing sunrise on the winter solstice. This careful observation from the south shore of our island, because of latitude and natural features, made it possible to chart one of two important cosmic happenings of the year. Other viewing points for “sky events” were also established around Kaua`i, since in ancient Hawai`i, all charted observations were part of a whole, a kilo, or unity of knowledge that governed the complete cycle of the life of navigator people on sea and on land.

Where might I view the winter solstice sunrise similarly in the present day?

Someone who wishes to experience the rising of the winter solstice sun may do so, viewing from Maha`ulepu area looking east. There, the sun can be seen rising over the ocean horizon appearing to touch the southeast cliff of Kaweli-koa. As the sun climbs higher in the sky, it gives the illusion of climbing the cliff as its rays light a path over ocean and land directly across the Wai’opili Heiau in Maha`ulepu.

At this time as illustration of the sky event presented in the preceding paragraph we are including the stylized graphic by the Institute’s friend and associate, the late Francis X. Warther, a retired architect known for his interest and lectures on archaeoastronomy (ancient astronomy) in Hawai`i. The graphic was prepared for Ka `Imi Institute’s Project Lokahi brochure, “Pele’s Riddle; Where are the Water’s of Kane?”*. Published to accompany Ka `Imi Institute’s “Pele’s Riddle” museum and library exhibits of the same name, the brochure’s graphic was also used as the cover design for a subsequently released educational cassette tape also entitled, “Pele’s Riddle.” 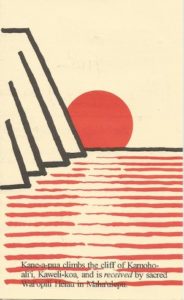 “Project Lokahi,” a study of Hawaiian sciences, was undertaken in the late 1980s by members of Ka `Imi Na`auao o Hawai`i Nei (To search for the truth of ancient Hawai`i) Educational and Research Institute. In line with the Institute’s mission statement, through lectures, articles, exhibits and classes for adults and children, as well chant and hula performance and a commercial educational recording, Project Lokahi has conveyed validated findings expressing “the truth of ancient Hawai`i” as transmitted through source chants of the halau hula (hula school) coded on symbolic and scientific levels.