Dear Roselle and Jim, Savitri, and the Board, Cast, and Supporters of Ka’imi Na’Auao ‘o Hawai’i Nei:

Mahalo Nui Loa for the gift that you gave the people of California.  Your Marin performance of “Recalling Hawaii” was absolutely magnificent!

From start to finish the audience was enthralled with the Aloha that you poured upon us.  The sheer truth, beauty, emotional depth, and artistry of it was so powerful that every person in that theater was deeply touched…so deeply that tears were flowing very frequently throughout the show.  Roselle’s words about tears at the show opening really opened the healing flood gates!

Sitting in the audience, surrounded by strangers, I constantly heard people gasping with awe, whispering “Wooowww” and “Oh my God!”  Really, it was just amazing the engagement that you performers accomplished with the audience.  It was life-changing for those lucky people who were there. They were so surprised at how good and full of learning this show was!

As usual there were people who had no idea there was an overthrow by the USA.  Many in attendance were amazed that there was so much they could learn about Hawaiian culture. After the show one serious hula student friend of mine from Marin exclaimed to me  “I am so ashamed of my poor ability in Hawaiian language!  I must study much harder!”  I heard several people express joyful amazement at how accomplished the kamali’i were.  One man asked me why there were no men dancing.  He said “I know that men dance hula … why were there none here tonight?”  I wished I had a good answer for him.  I finally said “maybe they are playing football?  But if you want to learn, you can!”

Once again I too was blown away by the depth of what you presented and how well you performed it.  I loved the increased complexity of the music and choreography.  You used that deep stage so well.  The dancers in the aisles made much stronger efforts to connect with the audience and to help the audience connect with each other.  It seems impossible to overdue that effort.  Most of the audience had no idea to stand up for Hawaiii Pono’i.  But they were happy when they did. 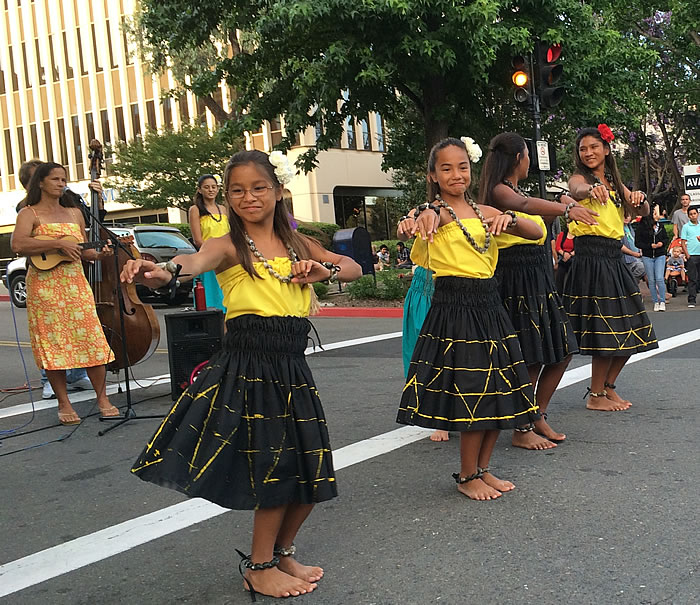 Giving the San Rafael Farmer’s Market a taste of Hula before the Recalling Hawaii performance in Marin June 21, 2014