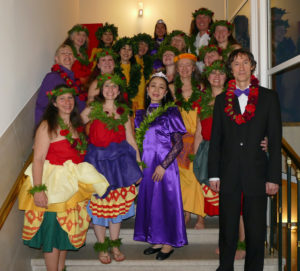 Dancers from our German and Swiss Halau performed during the evening event of a Japanese cultural music exchange in Vienna. 2019 was the year of the 150 anniversary of the Japan-Austrian friendship and this evening event in one of the classic, imperial concert halls in Vienna was one if it’s highlights, featuring classical music performed by Austrian and Japanese artists and this year was the first time that the program also included Hula. Japanese Hula Halau Aloha Anuenue performed first, then our Austrian Halau brought a program in honor of King Kalakaua and his ventures in and around the relationship with Japan. We started  the program with our friendly pianist Michael playing the original Kalakaua March, by J.Ospel, conducted first in honor of Kalakaua’s visit with the Austrian emperor in 1881. After that we performed the dance Kawika together with the Japanese Halau. It was a great honor to get to know the Japanese-Austrian cultural organization, to perform in these famous halls and also a wonderful evening together with our German and Swiss Halau sisters. 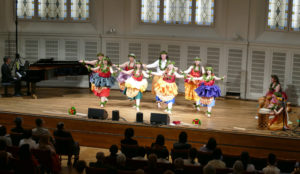 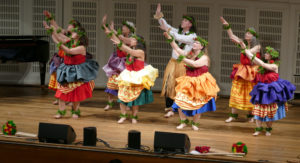 We were invited to partake on behalf of the US Mission in Austria in the cultural program of the United Nations Women’s Guild Bazaar, a charity festival held once a year. The UNWG organizes the annual International Festival Bazaar for the public with free admission for the day.  There are gift items for sale from around the world, special food and drink offered by kitchens from 80 countries.  There are also international cultural performances for the family. Kaimi’s mission and vision was introduced by the MC of the day, ending with “E Mau Ke Ea, E Mau Ke Ola” Let the spirit live; may life and health flourish”, to which she added: “Can’t we all agree to that.”
Quotes from the US Mission Public Affairs Officer: THANKS AGAIN for your beautiful hula performances at the UNWG Bazaar!  It made the event so special, and was truly a wonderful element of Hawaiian/USA culture to feature. The audiences LOVED it.  Attached are a few photos, which you’re welcome to use on any of your public platforms.  (The women you’re with are U.S. Ambassador to International Organizations in Vienna Jackie Wolcott [blonde], and Deputy Chief of Mission Nicole Shampaine [brunette].) 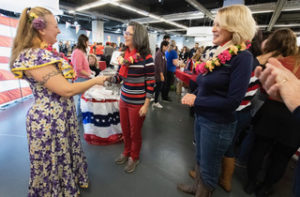 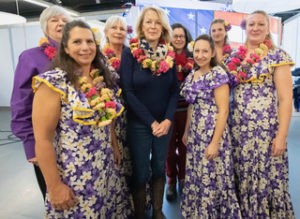 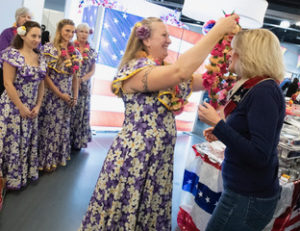