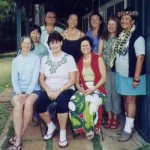 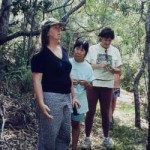 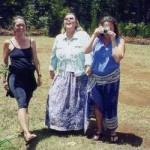 It was an exciting weekend at Pu`uhinahina. Joining Roselle and the kumu class (Keakawaiola, Moanikeala, Hi`ipoi, Keanuenue, Keahi, and Heu`ionalani), were three members of a crew from National Public Radio. Stephanie, Maureen, and Edie were preparing a program for a series on women in leadership. To gather material for the segment that will feature Roselle, the crew interviewed her and the students individually and collectively. They also listened to spontaneous mele and hula, ate, hiked, and generally made themselves at home with the halau.

As it happened, they had chosen an especially active time for their visit. Besides the kumu class, Pu`uhinahina hosted a rehearsal for the 28 August Washington, D.C. performance and a short practice for a program that Keahi, Moanikeala, and Heu`ionalani presented at the 16 August memorial for Pila Kikuchi.

The students also chanted, sang, and danced at a family memorial gathering at Koke`e park on Sunday, 10 August. Stephanie and her collaborators attended this event, recording some of the oli and mele. All too soon, it was time for them to pack their cameras, recorders, and memories down the mountain and off to the studio.