This is the first time that most of Roselle’s Hula students in Germany came together to continue learning the culture and dances of Hawaii.

Following were the activities during the workshop:

• Chanting and ‘Pule’ before and after the days’ activities
• Intensive hip and foot-work training
• Dancing – Kahea – Singing
• Learning the valuable words of Hawaiian culture
• Ukulele & Guitar Playing
• Sharing and exchanging ideas, knowledge and abilities
• Announcement and planning for the Hula Concert in Heidelberg (24th July 2004)
• Ho’ike (performance done at end of the seminar to show what we have learned)

Extra Activities such as:

Intensive hip and foot-work training Everyday through out the workshop Roselle starts the class with intensive hip and foot-work training to make sure that our hips move the way it should be, steps are clearly done and proper body posture is assured. Very important in dancing Hula.  Proper way on doing the sitting or standing position in between dances (through the beat of the IPU)

New dances were taught and old dances were intensively reviewed and corrections were made. In some cases some additional dance-steps were created to adjust to the rhythm of the music version.

One dance we learned is beating the Ipu at the same time as the normal steps and hip movements. At first it felt like its impossible to learn all these movements, but with Roselle’s patience and method, ‘there is nothing impossible in Hula’.
Learned the entry dance (KAI). A dance that brings the dancers in front of the audience. A very impressive entry dance accompanied by chanting and Ipu.

An old German song was sung and danced in Hula style as a present to Roselle and Jim. Not only that, we also do the hula hand gestures for the German song that was composed by other Hula sisters during their visit to Hawaii last year.

A part of every dance is ‘to kahea’ (announcing the next verse). Some of us did very good to ‘Kahea’, like Jean from Hamburg. We have learned the right way and timing when to do the ‘Kahea’ and also tune and pronunciation too.

Some chants and songs were reviewed and some tunes corrected.

Learning valuable words and practices in Hawaiian language and their meanings

Hawaiian culture and practices were taught. We discussed and learned how to implement or initiate them (such as: respect – honesty – sharing – trust and more). To strengthen our Hula group there are not only the dances, songs or activities to share, but behind these activities there is more to learn, practice and share.

Ukulele & Guitar Playing
After dinner Andrea and Stefanie taught some ladies how to play Ukulele or Guitar. Luana and Silke played the music instruments with them too.

Sharing and changing ideas, knowledge and abilities
A very exciting part during the workshop. We Hula sisters from Berlin showed and shared the technique on how to make Leis in different ways, raffia and shell Kupe’e’s. We shared our activities (previous and past). Jim introduced a new way of tying the Raffia grass to make it more ‘bushy’ (we will show his method). Other hula sisters shared their experience growing their own gourd, treating and drying them until it becomes an IPU.

H o’ike
The best and the most challenging part of the workshop program.

It is the BEST because we performed the dances that we learned during this workshop, as well as older dances that we learned previously. During the Ho’ike a block of Kahiko and Auana dances were performed with entry and exit dances. It was very nice and we had an audience of eight (that includes Jim, the daughter of Karen and a family that lives close to ‘Haus Eberbergs’)

It is the most CHALLENGING because we have to show what we have learned and perform the best we can.

HULA CONCERT in Heidelberg
Roselle announced the ‘Hula Concert’ to be held next year on the 24th of July in Heidelberg.
For this event a few Hula Halaus from Hawai’i will be flying to Germany. Roselle’s students in Germany will also be participating in this event. We will be performing a set of Kahiko and Auna dances.

For Kahiko dances we will need the following costumes and accessories:

• 1 yellow Pa’u
• 1 red Pa’u
• A red top – similar to the old ‘white Top’ that was used at the Ethnologische Museum performance. (please refer to the sketch given by Luana)
• A set of wrist and ankle Kupe’e made from Raffia (natural / beige colour)
For the wrist about 3 – 4 cm long – 8 rows
For the ankle about 4- 5 cm long – 8 rows
• For the head and neck – probably greens ( decision will be announced later)

For Auana dances we will need the following costumes and accessories:

• Mu’u mu’u (everybody has their own choice of muu muu.)
• 1 big flower for the head (decision will be announced later)
• 1 raffia skirt (natural/beige colour – Pa’u length)
• Shell necklaces

This workshop was very effective in improving the skills of Hula dancing – getting to know other hula-sisters. The fact that it was an in-house – 6 days activity the intensiveness of the whole activity binds even more and stronger between the hula sisters. Its was FUN and the HULA spirit was overwhelming. 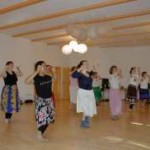 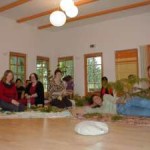