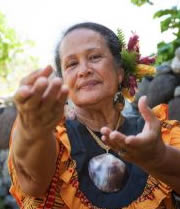 In 1975 a resolute kumu hula (hula teacher) named Roselle Bailey took on the restoration of Keahualaka, an ancient hula amphitheater on Kaua‘i that had fallen into disrepair. Over the course of several years Bailey and her students spent weekends yanking weeds, nurturing native plants and safeguarding archeological features. By 1983 both stage and students were ready; Bailey’s hula halau performed an ‘uniki (graduation) at Keahualaka, breathing life back into the site with reverberating chants and pounding feet.

Decades later Bailey discovered another amphitheater in need—in Heidelberg, Germany. It had been built during Hitler’s reign, created amid the ruins of Celtic and Roman temples. Locals neglected the once sacred site out of shame for its Nazi heritage. “We need to ho‘oma‘ema‘e [purify] the place,” Bailey told her students. It took four years to gain permission and assemble her international troupe, but in 2004 dancers arrived to sweep the stage clean of broken glass and weeds and painful memories.

Bailey is something of a hula ambassador, having traveled the world sharing her immense knowledge of the sacred Hawaiian dance. Born on Maui in 1937, she began dancing at age four under the tutelage of some of the best: Emma Sharpe, Edith Kanaka‘ole and Kaui Zuttermeister. Her first teaching post: the Middle East in the 1960s. For five years she lived in Iraq with her husband and two daughters. While he worked on a C. Brewer & Company plant, she taught hula to children living on the company’s compound. “I came back an Arab,” Bailey laughs.

The bulk of her teaching occurred on Kaua‘i, where she led a halau for twenty-two years. She has taught and performed throughout North America, India, Thailand, New Zealand and Samoa. Twice a year she visits her satellite halau in Europe. Her dedicated students gather in a German farmhouse to build on what they’ve learned, intoning chants in Hawaiian and their native languages. Lately they’ve been rehearsing their teacher’s latest production, Recalling Hawai‘i, a medley of hula and history. The show, featuring fifty-plus performers from around the globe, opened in Heidelberg Castle. “It’s the first time they’ve had Hawaiians there,” says Bailey with a grin. On November 9 the cultural exchange will reverse: Europeans will be among the dancers performing the show in Honolulu’s Hawaii Theatre.